Many Eyes and literature summary

I’m not the first one to come up with this idea – Ntino posted about it before. However, I didn’t really understand before how powerful it could be. Using Many Eyes visualization capabilities I’ve created a quick browsable summary of abstracts related to a particular protein. I took all abstracts PubMed returned for a particular query (in this case it was “YadA Yersinia”; YadA is a prominent adhesin and important pathogenicity factor in Yersiniae) and uploaded them as text into Many Eyes. I chose “Word Tree” representation and searched for “yada”, which gave a nice graph of the most prominent phases related to this protein/gene name. Maybe it’s not a breakthrough, but compared to the classification/semantification provided by GoPubMed, such approach works much better for entities that aren’t well described in biological ontologies.

Given that the whole concept is pretty straightforward, it would be nice if one of alternative PubMed search engines provided a similar method of summarizing user’s query, don’t you think?

Posted by Pawel Szczesny on October 4, 2008 in Papers, Research, Visualization

Structure of usher pore is available

Some time ago I posted breaking news about solved structure of usher pore. And few days ago it was deposited into PDB as 2VQI (publication appeared in Cell, here’s the abstract). The structure is a beatiful dimer (see above) of 24 stranded beta-barrel, the first of its kind. The paper contains also structures of the whole complex reconstructed based on cryo-EM data.

Interestingly, while the structure of the native dimer is symmetrical, the function of the units is not. Both of twinned pores are involved in alternating recruitment of chaperone:pili-subunit complexes, but only one actually transports pili subunits out. Overall, given large amount of detailed studies on the mechanistic properties of pili transport and formation, this is the best understood translocation process at a structural level.

Read the paper and draw your own conclusions, but for me it changes the way of thinking about protein translocation in bacteria. We learnt a lot on bacterial secretion by observing how similar proteins are involved in fundamentally different processes (for example DNA export and toxin secretion may use the same system). Similarly, usher pore is going to serve as an exemplar for newly found translocation elements.

Comments Off on Structure of usher pore is available

Posted by Pawel Szczesny on May 31, 2008 in Papers, Proteins

I was still thinking about recent Neil’s wondering about possibility of automating every scientific workflow, when I saw this (Bioinformatics Advance Access abstract):

Taverna is an application that eases the integration of tools and databases for life science research by the construction of workflows. The Taverna Interaction Service extends the functionality of Taverna by defining human interaction within a workflow and acting as a mediation layer between the automated workflow engine and one or more users.

I have not tried it yet but this Taverna plugin is very likely an answer to doubts I often have when automation of bioinformatics workflows is discussed: we shouldn’t always remove ourselves from the workflow, as interaction with software can be often critical in making a discovery. For example conscious decision about which sequences should go in during PSI-BLAST search can dramatically influence quality of resulting profile. So I agree with Neil that not every workflow can be automated, but more importantly not every workflow should be. Possibility of wrapping one’s mind around a problem is gone when there’s no feedback loop on the process.

Posted by Pawel Szczesny on March 12, 2008 in bioinformatics, Papers, PubMed

Jane – Journal/Author Name Estimator is a new web based application that can suggest potential reviewers or target journals for a manuscript based on its title and abstract. It was just published by Bioinformatics under Advance Access (but unfortunately it’s not an open access article). I have tested two of my upcoming publications and Jane performed well: I wasn’t surprised by most of predicted names and journal titles. The topic I’m writing about in these papers is rather narrow, so don’t treat it as any performance measure – test it yourself, if you are interested.

Probably I’m not going to use it as authors suggested – I consider this application a helpful literature research tool.

Currently almost all scientific journals provide a RSS feed of their content. I am very grateful for that, as many other scientists. However, I see a large disproportion between what I would like to scan through and what I’m actually able to. Abstracts, which are usually provided in these feeds, look almost exactly the same, and after thirty or fifty I’m not really sure if I understand what I read (most likely even Robert Scoble would have the same problem, although at a different level). Biochemistry journal found a solution (see below) – providing images instead of abstracts in the feed (in fact, they used this approach on their homepage long before RSS feeds became a standard). It’s simple, very effective and I have no idea at all why it’s not more popular. So here I’m asking – publishers of scientific journals: please give me images in the journal’s feed. I don’t mind having also the abstracts, but visual summary would be much more useful. In return I promise read these feeds instead of relying on Pubmed searches or my colleagues recommendations and GR shared items.

I’ve just read an introduction to the supplemental issue of the journal PROTEINS, dedicated to the most recent round of the CASP experiment. It describes the progress of the protein structure prediction over the last few CASP editions.

I believe that this was possible thanks to the progress that has been made in the area of sequence homology searches. Finding similarity between two sequences well beyond any reasonable identity thresholds is now doable thanks to profile-to-profile comparison, meta-servers (joining predictions from many different methods) or recent hmm-to-hmm algorithms (comparison of Hidden Markov Models). If you can find a suitable template for your protein, the rest is then much easier, isn’t it?

There are of course fields that still need some work. One of these often stirs a lot of discussion: automated assessing of model similarity to the real structure. The current methods have proven their suitability, I definitely agree. However I hope that at some point the protein structure comparison software will refuse to superimpose eight- and ten-stranded beta-barrels or left- and right-handed coiled-coil with a message: “It doesn’t make sense.”

Recently, among articles “in press” from Current Opinion in Structural Biology I found a paper by Thomas Goddard and Thomas Ferrin about software for visualization of large molecular assemblies. Even if the focus of this paper is not preparation of publication quality pictures, software cited there sounds familiar: Chimera, Pymol, VMD, Qutemol. The authors mention also VISION, which is a visual programming environment capable of presenting molecular data. Molecular Graphics Lab of Scripps Research Institute that works on the VISION has some other interesting tools, including PMV – Python Molecular Viewer, which I hope to cover some other time.

Anyway, this paper actually reminded me of something. I did mention that new version of Chimera can produce input for Povray, but I did not realize that it’s not the only change in this version. After upgrading to the current version I found out that it has also several “presets” of settings suitable for on-screen viewing or producing the figure. That makes preparation of the figure much faster and if you still don’t like the results you get good starting points for some tweaking. 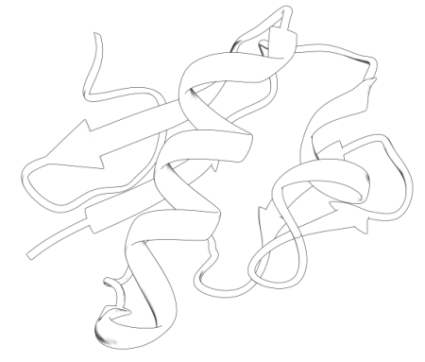 Posted by Pawel Szczesny on September 1, 2007 in Papers, Visualization

After yesterday’s post it’s no secret anymore that I’m interested (among other things) in oligomeric prokaryotic proteins. I often browse recent additions at PDB and see if there’s a new, exciting and pretty (symmetric) structure deposited. A week ago a picture similar to this below drew my attention.

This nice ring of helices is a model of the molecular needle of type III secretion system (T3SS). This system is used by many bacterial species during an infection: attaching to the host cell is followed by a insertion of a needle into the host cell and transporting effector proteins directly into that cell. The model here is a combination of the crystal structure of the single subunit and 3D reconstruction of the needle from electron microscopy.

I believe that next years will bring more full atom models of important cell structures. It can be seen directly from the publications: certain research groups are solving structures of missing elements of the large protein complexes, one by one. The model above is for sure a one step closer to having the whole T3SS, including cytoplasmic, transmembrane and extracellular parts at a atomic resolution.

The paper about this model was published last year in PNAS (free access) by Janet E. Deane and Pietro Roversi et al. The model is deposited in the PDB as 2V6L. PubMed ID for the abstract is: 16888041.