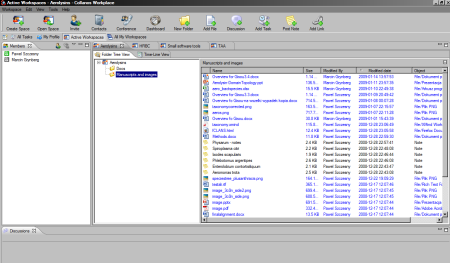 One of my workspaces in Collanos

For some time already I was looking for a tool that would eliminate a need for sending files back and forth between people collaborating on a the same project. While I’m perfectly aware of various solutions such as wikis, version control systems or online office suites, I didn’t feel like I could convince my collaborators to use any of these. One of the reasons is always a feeling of insecurity when using publicly hosted platform (BTW, this is not that uncommon among scientists – I know at least one scientific institution in Western Europe that explicitly forbids using Google apps, especially Gmail for work-related stuff, because of Google’s privacy policy). The other reason was that such solutions are not the best choice when working on binary files (most of my projects do not involve collaborative programming). When I stumbled across Collanos Workplace, which offers peer-to-peer synchronization (although without revision control), instead of a central-server based, I’ve decided to give it a try. For the last couple of weeks I’ve been using Collanos to collaborate on one relatively simple project and the experience was quite positive.

At first, I thought that Collanos may serve mainly as a tool for secure peer-to-peer files sharing with an information who changed what etc. It turned out that this is a capable project management application, that has a chat and discussion panel, one can post notes, links add tasks and assign them to team members. Files are stored is a separate directory – after one adds a file to Collanos, it should be opened from the application, not from original folder. This seemed a mistake in design at first, but I appreciated it very quickly. Synchronization of project directory would mean sharing all of its contents and that can be sometimes in the range of many GBs. From time to time some bug appeared here or there, but overall it worked as expected. Peer-to-peer sharing means that both people have to be online for synchronization, but so far situation that I switched computer off before a person could download my changes happened only once and it was during a weekend.

As a side note, it’s nice to see that Eclipse becomes an application platform for quite a number of programs. See for example this list of Eclipse-based software.

Posted by Pawel Szczesny on January 15, 2009 in Research skills, Software

One response to “Collanos Workplace and scientific collaboration”